My apologies for not picking up on my “psyopped” series in case you were missing it. My worklife has been a bit of a trainwreck since I last wrote an entry, and it started to feel redundant in any case. That’s not to say I want to abandon that type of blogging completely or even that series of posts, but the absolute saturation of news events has been overwhelming, to say the least. And now that the media has reaffirmed the fact that “debate season” will never end until no one else on earth has any amount of wealth or comfort save for the very select few — “the beatings will continue until morale improves” — I can’t bear to pay too close of attention.

Despite the shittiest of days, I can still wake up the next morning and face a new one, and that’s worth a lot. I don’t feel too swayed by the wackier practices americans are apparently flocking to these days to escape the drudgery of the material and square their dissonance in the age of Trump and that are being propped up and further encouraged by some of the more “eccentric” democratic candidates. There are a lot, aren’t there? I don’t care to know them as individuals. My question reads as rhetorical but the whole production is very curious — however, all hands are on deck in this age of extreme disparity that occurs simultaneously with an age of apocalypse in its most basic sense: revelations and the inability of the most powerful on earth to continue plugging the leaks without something getting through.

It’s a scramble, and the national american stage reflects it — time to bring in the clowns. Clearly, any one with a brain knows the score and sees how flimsy and ridiculous this “debate” is. Even those supposedly scandalized by Trump realize it at some level, but they participate and chatter at the office as if they are really doing something, doing politics. To admit otherwise is scary.

To me, the clingers to these rituals and their modern reinvented variants are as delusional as the candidates themselves: they really think they are doing something. I don’t even know if cynicism is an accurate description of their motives. I think they really believe in this hustle and bustle of politics and news making and all the rest of the shit that’s imagined in movies and television that’s supposed to tell the tale of the seat of the “free world”. In the end, their personal motivations don’t matter, and they should all fry for their legitimization of this spectacle and bogus system for their paymasters.

On any given one of those said mornings I wake up with resolve to face another day and get it over with like a damn bulldog, I swear, something random pops into my mind after a nice hours-long rest like I imagine happens to a lot of people. A few weeks ago I had figured out the meaning, finally! of the song “Lucy in the Sky With Diamonds” in my semi-conscious state. It had more meaning then, and I cannot for the life of me tell you what I was on about that morning. Of course, if you ask one of the surviving attributed authors, it meant this or that then, it means drugs now “just like everyone suspected” according the remaining of the human deejays you can still come across on the airwaves.

Personally, I love the song. I and others of a kind of “gap” generation born in the late 70s and early 80s came up in an interesting time of american popular music reckoning with a lot of stuff in yet a very stifled and controlled way, and even that isn’t allowed any more. The 00s grousing about autotune wasn’t that far off as far as its signaling of a turn away from human made music. Human-sung R&B harmonies made by non-shit-taking all-female groups were bliss to be captured on a cassette tape recorder straight from FM.

In any case, my experience of 90s music was that it was very closely tied to the “classic” stuff our parents liked, so it was common among my social circles to know those tunes as well, to know the legacy of Jimi Hendrix’s guitar playing, to know the various twists and turns of the careers of artists associated with acts such as Led Zeppelin and the Beatles, to know who sampled what original recording by Aretha Franklin. 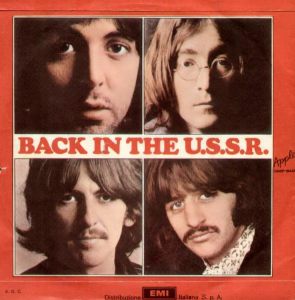 Everyone assumed “Lucy” meant getting high, tripping out, and losing your damn mind, laughing at all the shit that surrounds you, even though you might not know why you are. It’s still a hot topic today among mainstream audiophiles. And it’s just fun to sing along with, especially in such a state.

Whether you entertain that the Beatles were a Tavistockian invention, or that Adorno penned all their lyrics, or that they were a secret Soviet plot — or none of the above, and I’m confused about the delineation here and these hypotheses are actually all one and the same — there was something this song hit on that is in my view unique to what they offered the masscult that is both a hyper drug-fueled, definitionally schizophrenic telling of the evolution to our present situation and its absurd plastiscene impermanence that can be improved upon with clarity.

Another development in this age of revelation that does not sway me in the least, but that does not surprise me in the anticipation for the Epstein story to make it big, is the extreme conservative reactionary environment filled with creepy crawly weirdos and agents alike who are now more emboldened to denounce anything “gay” as part of the pedophilia agenda. This of course goes hand in hand with a very binary view of how conceptions of evil and good work in the world, god versus satan, and all that very american evangelical madness.

A feminine light — la luz — in the sky, glittering like diamonds, has also been read as luciferian and inherently pernicious to this sector. Unfortunately, endocrine disruptors, machinations of the pharmaceutical industry, or the politics of race and the oppression of the global South by the North don’t factor as much as satan wanting to turn all the frogs on earth into females and your sons into fags as they would have it, so who really cares what they think, but they are part of the landscape.

It’s interesting that the blood-drenched Scarlett Johansson has been in the news recently and the subject of memes about how she can play any role she wants to as she played the embodiment of the evils of “illumination” as brought about by drugs and high technology in the 2014 film, Lucy. Her role as unwitting bimbo turned all-powerful ruler of our increasingly electrified air that communicates secrets the world over isn’t that difficult to parse no matter how muddled the thing turned out, as so often happens with the films she’s cast in. In the early 1900s US political landscape, anarchists and socialist movements throughout the great plains and midwest focused on the “light bearer” in their publications — clearly, another strike against our precious super masculine sons and male frogs.

I joke, but this insistence on metaphysical transformation as escape seems omnipresent — crowned princes and princesses by the self-appointed gods who would like you to believe they control the entire material realm and then some to bring you enlightenment that does not amount to much more than an episode of Game of Thrones and knowledge itself being cast as the root of all evil by their prescribed opponents. That we can know and act independent of the ruling class’s reach and their many ways to entrap us technologically or otherwise is a scary prospect for them and they thrive off this attention in the many disguises they use. Lucy in the Sky with Diamonds, I’m tired of anyone giving it to them.