In another installment of the “huh huh the president are dumb monkey” files, Donald Trump looked at the sky with naked eyes during the eclipse. I guess that was one advantage to all the clamor created over getting the correctly approved “glasses” for “eclipse viewing”. In truth, one could have looked at the sun directly for a few seconds like they might on any given day. Apparently our eyes are “fooled” during such an event since we’re not seeing the sun’s brightness in totality. But this hype was all about our safety after all, for the public good. Yuh huh.

Some fellow travelers and I were concerned about a geopolitical false flag the psycho-masters might have tried to pull, you know, tying in their unparalleled material power with the wild wonders of astronomical events to prove their right to own absolutely everything. Whew! I said, initially. Well that was a little self-centered, wasn’t it, as Trump announced a “new Afghanistan strategy”.

What american gives a shit about Afghanistan? It’s constantly repeated that the whole of Afghanistan is simply “our longest war” and not “the brand america ruling class’s strategic colony”. Even Obama was able to allude to the toothless “endless war” narrative when it was announced in early 2016 that the occupation would be “decades” longer. It’s been nearly two, but no one seems to be counting anymore anyway.

The new American outlook marks a striking change for Obama, who campaigned on a promise to bring American troops home and has said repeatedly that he does not support the “idea of endless war.” And it highlights a major shift for the American military, which has spent much of the past decade racing to hit milestones as part of its broader “exit strategy” from Afghanistan and Iraq. These days, that phrase has largely disappeared from the military’s lexicon.

In its place, there is a broad recognition in the Pentagon that building an effective Afghan army and police force will take a generation’s commitment, including billions of dollars a year in outside funding and constant support from thousands of foreign advisers on the ground.

There’s a contingent among the aforementioned travelers who seem to be convinced this whole thing is about opium. The drug trade is of course monumentally important to american empire — these drugs fund everything from the brothels their soldiers rape girls in to fueling their brainless head chopping zombie mercs long enough for them to be thankful for death when they outlive their usefulness and pacifying the population “at home”. But when Voice of America is at the ready to provide us with talking points that can be easily reversed, perhaps the scope should be widened.

Afghanistan mission has new goal of denying it to PRC/PK & securing it for US/IN. That’s why it’s got legs. I’m only one pointing this out?

Duh. I mean, I’m not trying to be harsh. But this isn’t the 70s, and we are way past discussing this latest move within the parameters Alfred McCoy put forward as USian intelligence “complicity” — not to take anything away from his research, but an analysis has to be built from that. Anyway, Peter Lee goes on to sum up, like, the whole of his work in a few tweets. By that I in no way mean to indicate that his work is “simple” or without substance, very much the opposite. The level of work he presents is admirable, and anyone reading this should read or listen to him. In these following tweets, he’s not being flippant. There are just a lot of moving parts to observe to start to see the whole, and anyone who cares about which direction humanity is headed in should find it an urgent task. 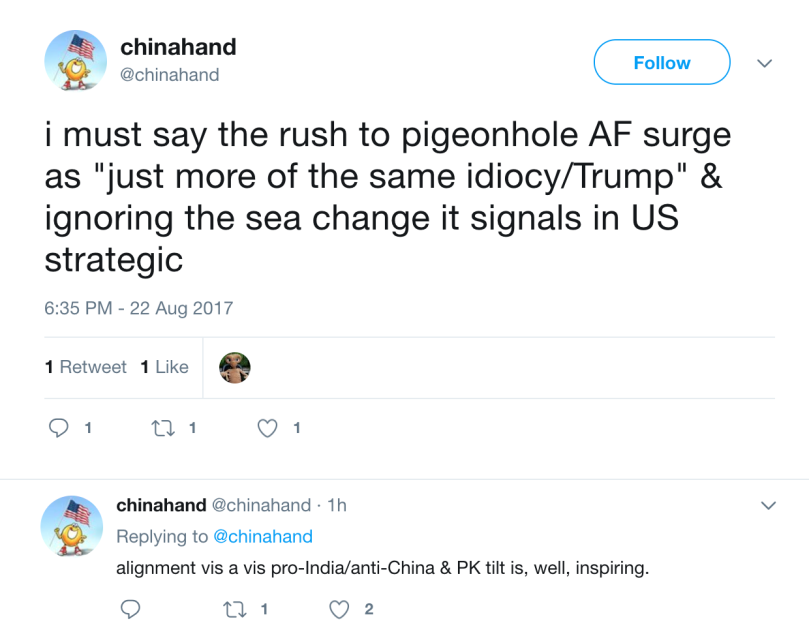 Where are the badass antifa protests on this matter? Where are the liberals who hate Trump and all that he stands for? Oh yeah — pftbhffftt, and breathing it in heavily. The democrat facebook pages are asking when Trump’s sons are going to be sent to Afghanistan to fight. Oh hahaha! They would do better trying to broker with friendly Taliban offshoots, of course. Oh, remember them!? Well holy shit, they’re STAYING! My god, is this news or what? (Or what.)

Sorry but every edgy “lefty”-whatever-anarcho-communist-socialist meme poster asking you to take a side, in the manner I discussed in my previous post, is indeed self-centered to a degree they really need to come to terms with before they’re given a tour of the patsy factory. They’re sloppily calling for nonstrategic violent reaction naming hate and white supremacy in these liberal floaty terms that anyone can catch like a virus unless they don’t, uh, post a meme (?). Here’s a fun example (to click through): 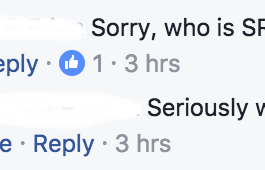 I know I just love to LARP with emojis when I can’t even name the side the non-haters are supposed to join. Don’t forget that the military has heavily invested in such games, and who better to have leading the antifa action than a spokesperson who is active duty? Geez, haters, all of us, who don’t love us some rainbows and sunshine and hugs and kisses. We just need to come together as a community, or something.

This is all done while we are technologically tracked to a degree that is unprecedented in all of human history. All this “convenience” — iris scanning, “voiceprint” identification, biotracking — has had its trial runs performed in, where else, Afghanistan.

Though the use of biometrics is relatively new for U.S. forces, collection efforts in Afghanistan have become ubiquitous, taking in data on large swaths of the population from government officials to local villagers.  In 2009, it was reported that even foreign journalists covering the war in Afghanistan would be required to provide their biometric data before being accredited and provided access to military facilities.  The collection of biometric data is viewed as being so essential to the war effort that the Afghan Ministry of Interior was enlisted to help run a program called Afghan 1000, which provides a comprehensive framework for collecting biometric data on the citizens of Afghanistan.  The program established a goal of enrolling eighty percent of the country’s population by 2012, covering nearly 25 million people.  While the actual enrollment numbers are not public, the Afghan 1000 program has been in operation for several years, collecting data for every traveler passing through Kabul International Airport, border crossings and Afghan Population Registration Department offices throughout the country.

The stated goal of the Afghan effort is no less than the collection of biometric data for every living person in Afghanistan.  At a conference with Afghan officials in 2010, the commander of the U.S. Army’s Task Force Biometrics Col. Craig Osborne told the attendees that the collection of biometric data is not simply about “identifying terrorists and criminals,” but that “it can be used to enable progress in society and has countless applications for the provision of services to the citizens of Afghanistan.”  According to Osborne, biometrics provide the Afghan government with “identity dominance” enabling them to know who their citizens are and link actions with actors.  “Your iris design belongs only to you and your left and right irises are different,” Osborne said at the conference.  “A name can be changed or altered illegally or even legally, but once your iris is formed at the age of six months, it cannot be altered, duplicated or forged.”

As I have written before, this human experimentation in conquered nations and on the dispossessed is only given attention when it more noticeably starts to affect the inhabitants of western nations of the whiter kind. And I don’t mean to “make fun” of people caught up in a moment, but that’s all it is. Moments captured about statues coming down that the “progressive” press continues to bleat on about while this other sort of progression — against China, against human consciousness itself — is occluded from view while the people they represent are alive, breathing, and enslaving by ever more ruthless and savage means.

There are no cardboard cutouts featuring 19th century technology that will shield from the shock of what may come, and by the time this tracking is in place to more centrally store the data needed for indeterminate, permanent control, I don’t know that there are going to be many (here) who will have their faculties about them to care. Sun bleached america has me down, but as Peter Lee’s site header reads “Life is … an open book to those who read”. The specifics of these fights, the ground yet uncovered, and the resistance that is already being put up is inspiring. Which side? It must be recognized as international, and that can only be done without the haze of role-played “war” that only pushes perspectives more inward in order to be trapped.

This work is licensed under a Creative Commons Attribution-NonCommercial-ShareAlike 3.0 Unported License.